Ok I'm bored and procrastinating  and this looked fun so I thought what the hey, considered not actually posting it but then I got my answers and well, it was too funny not to.


RULES:
1. Put Your iTunes/Windows Media Player/ETC on Shuffle.
2. For each question, press the next button to get your answer.
3. YOU MUST WRITE THAT SONG NAME DOWN NO MATTER HOW SILLY IT SOUNDS.
4. Put any comments in brackets after the song name.
5. Put this on your journal.
6. Tag 5 friends Any one who likes to do this, please go ahead :)

Wow my music collection is quite weird, but that was fun.   Now I should do some work.  Woohoo for Grad School.

Oh my God, i actually post here. Yes, yes I do I've been a combination of bored and busy and as such have not posted here in quite a bit but the dears all have faceups done by my soooo very wonderful friend so I thought I would post some pictures I took outside today. These are of all 4 dears with closeups of their new faceups and Beltzan's scars. Enjoy.

So I haven't posted in awhile so i decided to do just that, so here is my post. Lets see, a few weeks ago I went to Houston and saw Lucy, as in the Australopithicine fossil Lucy, I was quite excited about it. It was an awesome exhibit trying to explain not only human evolution but also Ethiopian culture, including religion so I was in nerd heaven. :)

Last weekend me and a group of friends went to Ikkicon in Austin and had a ball. We cosplayed as Heartless and a rainbow panty wearing Roxas (Inside joke). Sorry no pics, Ill have some of us from Aggiecon hopefully though. I think i developed a slight obsession with L from Deathnote at the con for some reason. Just thought I would throw that out there.

Beltza's closer to becoming finished, he got his wig and new eyes that complement his wig. I am so very happy. Once he gets a faceup and clothes pictures will definitely be taken.

Other than all this its been school, school, school. Boring and whatnot but hey thats life. Random bits of cracktastic fun and boringness. Not much else to say so talk later.

So I did a couple of photo shoots with my dolls for the holidays and here are the photos from them. And yes I know they don't have faceups but I still theink they look good
the two at the end of Beltza are random shots of him modeling a Christmas present from Zaith

I honor of both Halloween and the fact my new doll Beltza arrived on Monday and the fact that NANO begins tomorrow I decided to post though I so need to be studying. Anyway here are some Halloween inspired pics of my boy more will come later. 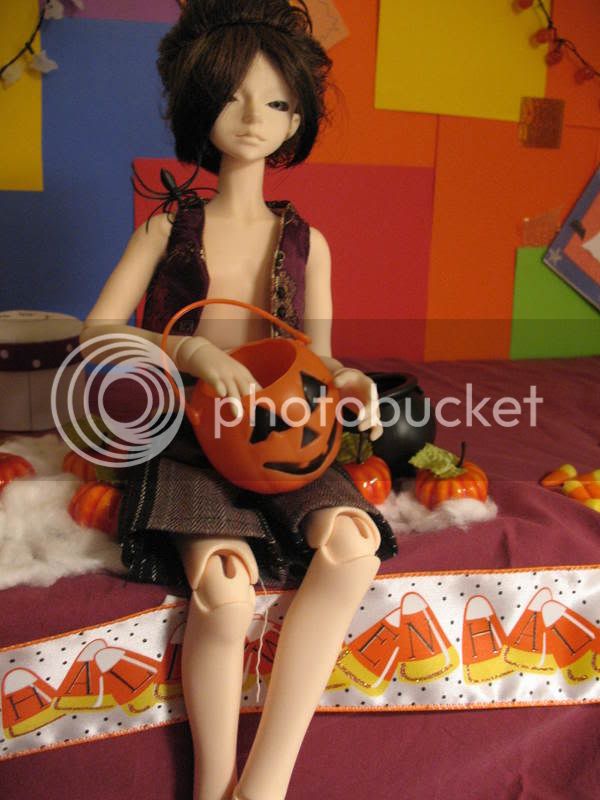 They're not the best but I do like them.

Okay so I finished book seven of Harry Potter, and can I say wow, it was awesome. So much happened some of it I thought would, and as much as I would like to bounce and tell everyone about it I won't. There really was no reason to this post I'm just slightly hopped up on very little sleep and a very good book. I shall shut up now before I spoil anything. ta ta.

Okay despite the fact that I have no clue if anyone actually reads this thing I am posting this here anyways. I need help looking for British slang words to use that denote extreme dislike. This is for my dear sweet Maggie, as she tirades against my friend's character Py. I can so see her slipping into a tirade of bad British swear words and slang when she finds out he is coming to stay with us, soo I need to know words that would denote this. Nay help wopuld be great either in Britsh slang you know or a place I could find it online, I mean you can find anythin online, right. So thanks to anyone who reads this sad little journal.

Ok so this is not an update of my stories like I would have hoped to been posting, school is evil and I have lost my muse for both stories and am working on a new one. In other news I have a wonderful picture of my doll, Magdalena Celia a character out of a friends story. She is MSD ball-jointed resin doll, for those interested as to what this is here is a wonderful forum for all things BJD's <http://www.denofangels.com/forums/index.php> Maggie is a MNF Lishe by Luts, here is there site if you are curious <http://eluts.com/> Anyways here is a picture I took in a relatively late night photoshoot in my apartment. 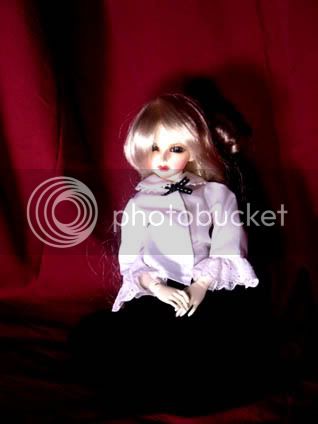 I love this picture because she looks both serene and otherworldly and she is kind of glowing which is great because she is a ghost. Now if only I can get a proper outfit for her and then some new eyes she would be perfect.

You never realize how weird life is until you think you should move in order to avoid the flaming food flying at your head. And this statement just proves the weirdness because flying flaming food is not only illogical but also highly improbable, and … ducking right I’m ducking. Yipes.
Okay hiding under a table in a cafeteria contemplating the weird turn my life took. It all started a couple of months ago when my chemistry class lab experiment blew up, not just the bubbling over ruined the experiment kind but the sky high flying glass a spewing chemicals kind and when it happened to noncombustible, nonvolatile chemicals lets just say I knew something was weird. I just didn’t know how weird.

It is now December and despite the fact that I have Finals coming and a major essay project due tomorrow I am a lot less stressed than I was last month. The reason, I not only finished but won National Novel Writing Month. Now I know I plugged it in my last post but I am very excited. I wrote 50,000 words of my story "Fire, Wind, and Other Normal High School Situations" and though I am not finished I am going to attempt it. I do believe that as I edit and hopefully finish my story that I will post it here. Don't get your hopes up at least too soon because first on my plate writing wise after finals is editing and finishing my BTVS fanfiction "Vengeful Love". Now this one has been started and has been posted but I plan to edit and repost what I have written and then finish the story at least beginning this over Christmas break. Since I have greater faith in not embarrassing myself about my writing I will begin to attempt to post the story her though it may end up being a link fanfiction.net if I can't figure out the LJ memory system since I am technologically impaired. So for all of you writing fans be prepared for two lovely pieces of poorly written spontaneuos, snarky and copyright infringed pieces of fiction coming soon. Ciao.
Collapse